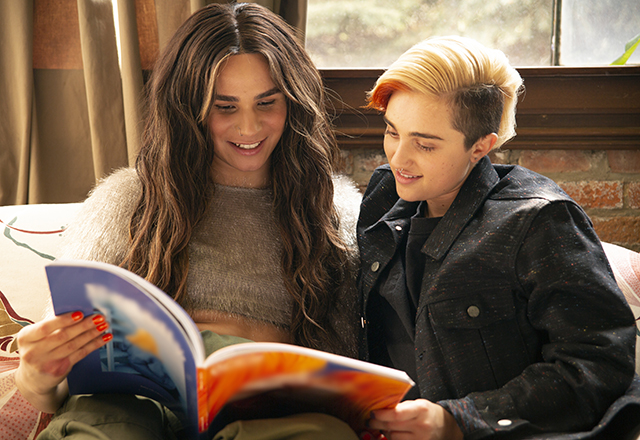 My name is Lisa, I have two children, the youngest being a 19 year old transman.

I had suspected my child was transgender from an early age, the signs were small but enough to concern me. I became more concerned as my child approached puberty, I had the talk, “You know your body is going to change, are you ok with that?”. I even taped an Oprah show on trans kids and showed my child to see if that sparked any conversation, but no, it didn’t. Puberty was early, around 11 years of age and awkward. By the age of 14, my child came out as lesbian. I remember that conversation well because of my stupid response, “Oh thank goodness. I thought you were going to ask for a penis”. I was thinking being lesbian is easier than being transgender.

1 year later, that stupid statement came back to bite me when my child told me that the issue was indeed gender. Even though I had suspected it for years, I still went into panic, he was about to start year 10 and I felt that transition would be easier after school, if I could just hold him off it would be safer. Not much was said and I sort of just sat on it for about 6 months. I ended up with a very unhappy child. He did all the research online as to what to do and where to go, came to us with the information, and so the journey began.

I was so weighed down by fear in the beginning, it was hard to function. My husband seemed to have a better grip on it than me but his mind didn’t think as much about the negative things that occupied mine, “will my child be safe, accepted, treated well, loved”. At times my fears almost brought me undone. Standing outside the gents public toilets waiting for my child to emerge safely was almost more than I could take. Reading the “Transgender Child; A Hand Book For Families and Professionals”, really empowered me. I felt like I had backup, information and a plan. Also the parents Support Group at the NSW Gender Centre was an amazing wealth of information and support. This helped me to move forward much quicker for us and our child, we made the jump. We had a party for our son announcing his new name and preferred pronouns. We made it a celebration for a new beginning.

He returned to school as male and things moved along. I did a lot of ducking and weaving and meetings ahead of time to try and spare my child embarrassment or non-acceptance. It was hard work and at times I felt broken. The last 4 years have been really hard for him and for us, socially, medically, legally and emotionally but so worth it. We have lost friends and family have not been so great but we have emerged a strong little family. We are close and have met some wonderful people through this experience. Both of my children have grown up to be amazing young adults. I am very proud of them and the way they treat others. From the beginning as a mother I wanted to fix things for my son, it took a long time for me to realise he wasn’t broken. The most profound thing he has ever said to me “I don’t feel I was born in the wrong body mum, this is just the way it was meant to be for me. It’s my journey and it’s ok”. Everyone’s experience is different as we are all individuals, but the one thing that is the same for everyone is love and support, we all need it.